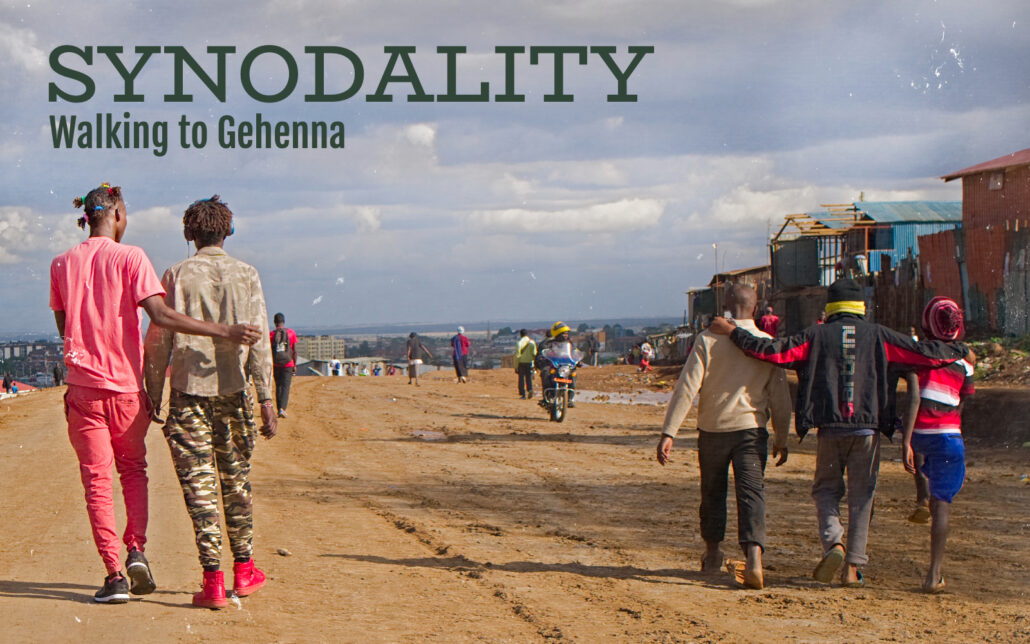 Our theme this year is synodality. Its root meaning is to “walk together.” We are learning how to become a synodal community who walks together across difference, discovering our sameness.

This month our journey takes a difficult turn. We are walking to Gehenna.

On March 8, 2017, 41 girls were burned alive at a government orphanage in Guatemala City. What was supposed to be a safe home for the girls turned out to be a place of unspeakable violence. It had long been rumored that many of the young women were being trafficked at night as part of a sex ring, run by staff. On the night of the tragedy, while their door was locked, the building was set on fire. All died.

We should note that March 8th is International Women’s Day – a cruel irony to an already horrific story.

The main word for “Hell” in the Gospels is derived from the word, Gehenna, which according to tradition, is the Valley of Hinnom outside of Jerusalem. It is the place where children were ritually sacrificed by fire as burnt offerings. The Hebrew word for these burnt offerings is tophet, whose basic meaning is “fireplace.” Some trace tophet to the word bōsheth, which means “shame.”  And this makes sense – our burnt offerings are the shame that fuels our sacrificial systems.

According to Jesus, Hell is an actual place, located here, in this world.

When Jesus refers to Gehenna, he is remembering a real place, with real people, who have real names. He does so as a warning of what happens when we enter into rivalry and begin looking for scapegoats to resolve tension. In other words, Jesus’ use of Hell is not other-worldly. He is speaking concretely, humanly, anthropologically, this-worldly about how life really works. To interpret Hell as a place of eternal punishment meted out by God is to miss its most basic meaning. It is a this-world holocaust brought about entirely by us. Gehenna is the Hell of our own making.

Sadly, our world is littered with contemporary examples. The recent shootings in Buffalo, New York, and Uvalde, Texas, here in the U.S. call to mind a litany of Gehennas. If we are not careful, righteous indignation quickly flares and consumes. We are eager to cast blame.

But in the Gospel of Matthew, Jesus warns, not those who directly carry out the atrocities, but the religious authorities and their sacrificial logic that brings them dangerously close to Gehenna . He calls them hypocrites (which means actors). He says to these “actors,” who play their roles so well, “You cross sea and land to make a convert only to make them twice as much a child of Gehenna (Hell) as yourselves.” (Matt.23:15)

Jesus doesn’t cast blame outward. Instead, he invites us to look inward, and accept the responsibility that is ours. Whoa! Jesus says, “Whoever causes one of these little ones to stumble (the word for stumble here is scandalize), it would be better for that person to have a millstone tied around their neck and be thrown into the sea” (Matt 18:6-7)

Jesus is using hyperbole to wake us up. He is shedding light on the inner workings of the sacrificial machine and that which keeps it running, which is our very own heart.

He warns us that we are literally playing with fire. Once a scandal is ignited it is difficult to extinguish. It quickly becomes a Gehenna, the very thing that turned Jesus into a public tophet (a burnt offering, or shame).

In an act of colossal denial and some truly amazing theological jujitsu, instead of accepting responsibility, we projected the Hell of our own making onto God. We propped up and maintained the very sacrificial system that Jesus came to put an end to, and we did it in God’s name. Over the centuries, we turned Hell into a reward/punishment system doled out by God, which conveniently allowed us to avoid taking responsibility for the Gehennas of our own making.

About a year after the girls were burned alive at the government orphanage, a small group of us were in Guatemala for another visit. We had just finished a wonderful dinner in Guatemala City. We made a short walk to the Plaza de la Constitución. When we arrived, the large square was empty except for four women who stood around a little fire at the center of the plaza. They were honoring the memory of the 41 girls.

We approached one of the women to find out more about their vigil. We had no idea how she was connected to the tragedy. Our Spanish was limited and so was her English. She introduced herself as Carmen. I showed Carmen a picture on my phone. I showed her a poster that some friends made in honor of the victims on our last visit.

Carmen studied the image intensely. Her face suddenly awakened in shock. She pointed to #9 on the poster and cried out, “That’s my daughter, Mayra!”

I keep this poster on my wall at the office. Mayra is a reminder that, whatever else Hell is, it is a reality of our own making. We are its creators and sustainers. And if we’re honest, we sacrifice each other to idols all the time. Our lives are filled with smoldering tophets sacrificed on the altar of our faith, our politics, and even our economic identities. The altars are as endless as the victims, and they are evenly distributed across social class, religious convictions, and political affiliation.

We are sacrificial machines.

The Spirit of the risen Christ invites us to make the walk to Gehenna and see that for which we are being forgiven. This truth-telling is not a punishment, but an invitation to a new beginning. The sooner we make this walk, the sooner we will be able to transform our Gehennas into the gardens of God’s love.

The one requirement is that we must suffer the loss of our innocence, and bear witness to the Hell of our own making.