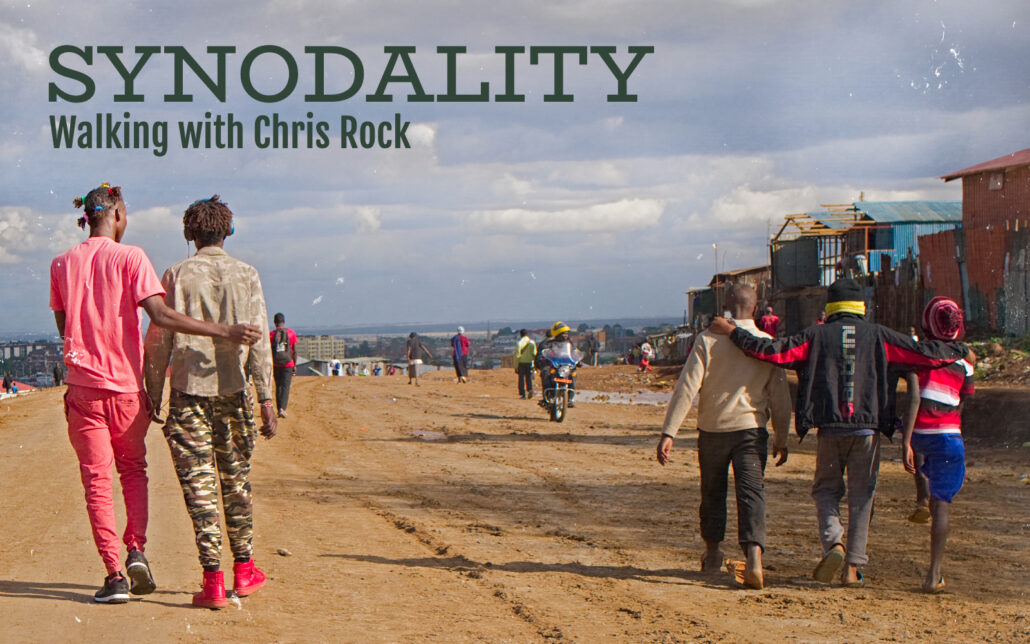 Our theme this year is synodality. Its root meaning is to “walk together.” We are learning how to become a synodal community who walks together across difference. We are discovering something we didn’t expect – our sameness.

This month we are going to walk on the lighter side of life.

Imagine sharing your name with someone famous.

For example, Taylor Swift is one of the world’s biggest pop stars. Taylor Swift is also a photographer from Seattle. Donald Trump is the former president of the United States. He is also the CEO of a cancer institute in Virginia. Chris Rock is a famous black comedian. I’m not.

Chris and I have shared the same name our whole lives. Mine is spelled differently, but pronounced the same.

In the 1990’s I was living in South Philadelphia. Someone stole my car and for two years racked up a bunch of tickets in my name. I was called into court to pay a huge fine. The bailiff called my name. As I stood up, every head in the courtroom turned. It was at that point I realized that I was the only white person in the room. I could hear a gasp, a pause, and then the place erupted in laughter…doubled over, full-on, from the belly. The laughter created its own momentum. Even the judge got a kick out of it. Eventually, he had to call for order in the court. He believed my story and let me off.

I’ve mostly had fun sharing my name with Chris. For example, making dinner reservations is always a skit. But the statistical oddity of sharing a name with someone famous can also get a little weird. We pay attention to our doppelgangers in case they do something crazy.

I was reminded of this when we all witnessed the “Slap Heard Around the World” at the Oscars earlier this year. I was moved enough to write Chris a letter. I began the letter by telling him how grateful I was that my parents did not name me Will Smith.

Why do I bring up this tabloid silliness?

I have spent much of my adult life trying to understand violence, knowing why it happens, how it happens, and how to heal it. This lifelong journey is helping me understand what it means to be human. Jesus has proven to be a spiritual genius in these matters. I follow Jesus because I believe Jesus is the genius of God made flesh.

Like millions of viewers, I was stunned when I saw Will Smith slap Chris Rock on stage. It took a while for me to register what was happening. Was this just a Hollywood stunt performed by the stars for ratings? At one level it doesn’t matter, because the performance was so good that it immediately became a cultural icon. It shed light on something that grips us all, and that is why I wrote the letter to Chris.

That night we witnessed three actors locked inside a relational triangle, each borrowing their desires from the other in a way that produced a crisis. As the audience, we had a role too. We created the conditions that fueled the crisis and gave it meaning with our oohs and aahs and retweets.

Of course, there is a backstory to what happened that night, and there is endless tabloid energy that can be spent on that, but the actual plotline is pretty simple. Chris Rock comes on Hollywood’s biggest stage to present an award, and according to the conventions of comedy, makes a joke about Jada’s hair. Will Smith (Jada’s husband) initially plays along and joins in laughter, but when he sees that Jada is hurt by the joke, Will quickly changes roles. He realigns himself with his wife. Now clear about his role and intent on defending Jada’s honor (and his), Will walks on stage, and with great theatrical flair, slaps Chris in front of the world.

And this is where the “performance” takes a creative turn.

Chris Rock responds to Will Smith, not by reciprocating the slap, which would have escalated things into an ugly brawl. Instead, Chris goes “off script” and does something that breaks the cycle of violence, and opens up the possibility of something truly creative. With both hands behind his back, Chris not only receives the slap, he has the presence of mind to speak the truth in plain language. He simply says, “Wow! Will Smith just smacked the shit out of me.” This breaks the spell of escalating violence.

A few days after the incident, a group of urban pastors gathered at Street Psalms’ office. We reflected on the incident. We talked about the mimetic cycle of violence and how public space is so hotly contested. Sometimes it feels like the slightest offense can set things off. This is true at the interpersonal, social, and even national and international levels. It crosses cultural, religious, and ethnic boundaries. It’s equally true on the left and the right. We are walking on eggshells. Pastors, teachers and well-meaning public servants are concerned about how to show up in public spaces without causing offense. Heck, families can hardly gather for Christmas dinner without risking WWIII.

There is a line in the book of Proverbs that I love. We are told that in the beginning when God created humanity, Wisdom played at the Father’s side like a little child, “rejoicing before him always, rejoicing in his inhabited world and delighting in the human race” (Prov. 8.30-31). The word “rejoice” (sachak) means “to laugh.” Yes, it seems we are created in laughter. Creation is the laughter of God. In fact, the words “humor”, “human” and “humility” are derived from “humus” which means dirt. It’s a humbling and ultimately very funny thing to realize God’s crowning achievement is a pile of dirt made alive with laughter.

What if what we call “sin” is really just our tragic failure to get the joke? What if all the suffering we inflict on each other can be traced to our refusal to enter God’s laughter and hold ourselves and each other lightheartedly?

In my yearbook, there is a picture of me looking dumbfounded. The caption reads: “Kris Rocke doesn’t get his own joke.” It’s a lighthearted jab at one who had a reputation for being a bit of a class clown. When taken lightheartedly, it’s funny. A community that walks together across difference delights in its own foibles.

I am grateful that Chris Rock has chosen to be silent since the Oscar incident, but at some point, he will break the silence. And like all comedians, he’ll want to be funny. To achieve something more than a cheap laugh at another’s expense, I have a hunch it will mean recognizing that public space is hotly contested, and our world is a tinderbox ready to explode. It will mean recognizing that we are all actors too often playing roles that we don’t understand, based on scripts we didn’t write, and this includes Chris. It will mean taking responsibility for the fact that calling forth light-hearted life from piles of dirt through wholehearted laughter is not only a divine act, it is a high-stakes artform that involves great risk.

I am praying for Chris to lean into his vocation and provide some relief. I am rooting for my namesake to remind us that life is not a tragedy, nor is it a fairytale. It’s a comedy! Shakespeare was right, “Everything returns to laughter.” It’s this returning that makes synodality in a community like ours possible.

If Chris can accept his vocation and remind us it is impossible to hate those with whom we laugh, then he and Will and Jada will have some fun with this, and it will make me so much happier the next time I make a reservation for dinner.

P.S. I never sent Chris the letter. This will have to do.