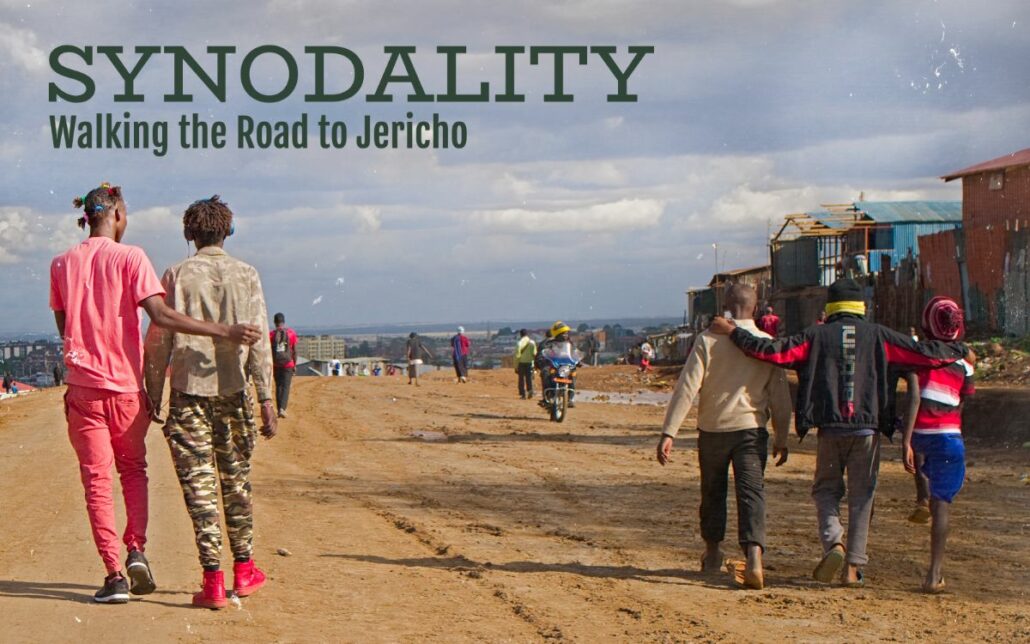 Our theme this year is synodality. Its root meaning is to “walk together.” We are learning how to become a synodal community who walks together across difference for the sake of the most vulnerable, discovering our shared humanity along the way.

This month we are making the 17-mile trek from Jerusalem to Jericho.

The road drops 3,600 feet in elevation on the way to Jericho, which not only has the distinction of being the lowest city on earth (846 feet below sea level), but also the oldest city on earth (9,000 BC). In Jesus’ day the steep, winding road was little more than an isolated trail. It had a reputation for being dangerous. It was easy for thieves to take advantage of vulnerable travelers.

This was the setting for perhaps Jesus’ most famous parable. It has become a cultural artifact. We even have a law named after it in the United States. The Good Samaritan law protects and valorizes ordinary citizens who go out of their way to administer medical assistance to a stranger in an emergency. To be a “good Samaritan” is to be a cultural hero. But when Jesus first told the story, Samaritans were considered anything but “good.” They were seen as halfbreeds and heretics because they intermarried with their captors who conquered the northern kingdom of Israel in 720 BC.

The parable of the Good Samaritan is a familiar story.

A religious lawyer approaches Jesus wanting to know how to “inherit eternal life.” A better translation might be “the good life.” But that’s not all he wants. He also wants to “justify himself.” In other words, he not only wants the good life, he also wants to be seen as a good guy in the process. His reputation matters a lot to him.

Sadly, this is a chronic condition for most of us. In the age of social media, managing our reputations is a full-time job. Nearly every part of our lives is a carefully curated image designed to gain the favor of whatever social group matters most to us. We want to be seen as one of the “goodies,” which is only possible if there is another group out there that are the “baddies.” Maintaining our reputation in this ever fickle, shapeshifting culture is exhausting. Today’s goodies are tomorrow’s baddies. Ugh!

Jesus’ story completely shatters these categories and invites us into a whole new way of being human.

The parable is not about a good guy doing a good thing. It’s the story of a culturally branded bad guy, who at great cost to himself, “crosses over” to the other side of the road to help a sworn enemy.

According to Jesus, when we “come near” our enemy in their time of need, we begin to enter the good life and begin to realize who and what God is all about. Of course, as Jesus points out, this only happens if we “cross over” to the other side of the road.

So, it seems pretty clear. The moral of the story is to imitate the Samaritan and “go and do likewise” which is precisely what Jesus says to the lawyer.

If this is Jesus’ main point is it not just another way for the lawyer to justify himself? It risks becoming another form of public dogooderism designed to gain us reputation points, especially in the modern age. Let’s be honest, crossing over to the other side of the road can be a kind of virtue signaling designed to project a reputation of one who is kind and compassionate. We serve the “less fortunate” all the while remaining firmly in control and lose nothing but a few volunteer hours at the soup kitchen.

Herein lies the genius of the story.

Jesus is not issuing a moralistic command. He is making an invitation. He is inviting the lawyer to “cross over” and “come near” to take a closer look – to “see” the half-dead man on the side of the road for who he is. Jesus is inviting the lawyer to look into a mirror and see his own image as the one in need of the one thing that the lawyer’s self-justifying heart is powerless to provide – mercy. And here’s the kicker – such mercy does not come at the hands of a good guy with a good reputation. It comes at the hands of a bad guy with a bad reputation.

We are the half-dead man on the side of the road and God comes to us in the shape of our enemy!

That which we’ve spent our entire lives trying to avoid turns out to be our salvation. Jesus occupies the place of that which we deem as cursed and God-forsaken. It’s from that place he blesses us. Of course, we lynched and murdered him and made a public spectacle of him for doing so.

But in the end, it’s the crucified-risen one who  “crosses over” and “comes near.” He “sees” us for who we are, and has “compassion.” He breathes into us the breath of life. He forgives us and nurses us back to health. He picks up the bill and sends us on our way. And that’s when the penny drops.

We can only imitate the Samaritan to the degree that we have experienced being half-dead on the side of the road. It’s only as we undergo mercy at the hands of our enemy that we can go and do likewise.

Allow me to speak personally.

I have chosen a self-justifying profession that makes me look like the Good Samaritan. I can accumulate public reputation points by virtue of what I do. I confess I sometimes play that card. But if I have ever truly done any good in this world, it’s only because I’ve been half dead on the side of the road and discovered myself nursed back to health by the One who comes to me disguised as my enemy.

As a white, North American, heterosexual, male, I have been loved into being by my “enemies.” I have been nursed back to health when I was too far gone to ask for help. Black and brown folk have insisted on seeing me as human when I have acted like anything but that, even as I continue to benefit from systems designed to promote me at great cost to them. Women have insisted on treating me with dignity when I failed to do the same. The LBGTQ+ community has provided a welcoming space for me, recognizing me as a victim of a homophobic, hyper masculine culture. All of them pulled me from the ditch at great cost to themselves and their reputation. They called me to something more. What can I say? I know this self-justifying lawyer very well. We are soulmates. I also know the touch of mercy that justifies nothing other than life itself, and the very weird kind of goodness of the One who creates it.

So, as we walk together into the lowest places on earth, creating cities of peace for all people where everyone belongs, may we go with assurance. May we go knowing that grace really is like water; it flows downhill and pools up in the lowest places. May this give us the courage to cross over to the other side of the road and come near those in need. May we see the half dead for who they are. And having seen ourselves, may we discover ourselves being given back our humanity by the ones whom we despised, who have no concern whatsoever for their own reputation – who are utterly free to love us. This is how God comes to us. I know this tender mercy first hand. I am persuaded that it not only has the power to heal the half-dead, but also fix the unjust roads that continue to produce them. And by “them” of course, I mean “us.”