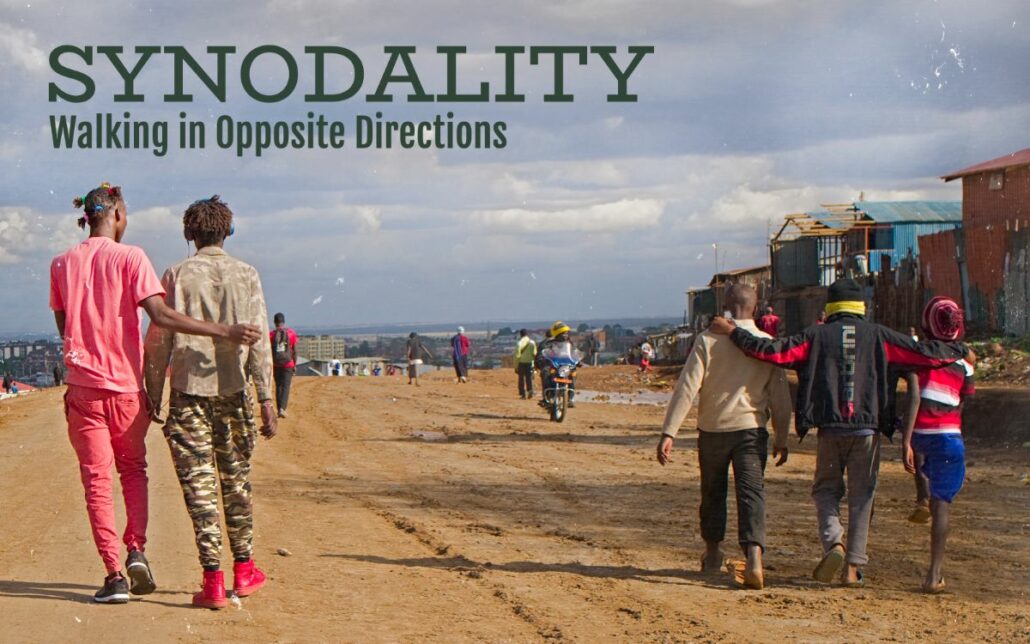 Our theme this year is synodality. Its root meaning is to “walk together.” We are learning how to become a community who walks together across difference for the sake of the most vulnerable. Along the way, we are discovering our shared humanity.

Inevitably, when walking together we find ourselves at a crossroads. One wants to go left, and the other wants to go right. Division threatens the ranks.

Something like this happened between Paul and Mark on their first missionary journey. Paul’s traveling companion, Barnabas, invited his younger cousin Mark to join them. Somewhere along the way, things fell apart. We don’t know the details. What we do know is that Paul accused Mark of “deserting them” (Acts 15:37-41). Perhaps the demands of the journey were too much for the younger Mark. Perhaps it was a clash of personalities or a disagreement on strategy or maybe it was just two egos in rivalry. Whatever it was Mark left and it caused a “sharp disagreement” between Paul and Barnabas. Not long after the incident, Barnabas invited Mark to rejoin the group but Paul refused. Barnabas saw something in Mark that Paul couldn’t. As a result, they parted company. Barnabas went one way, with Mark. Paul went another way, with Silas. They continued the mission in opposite directions.

Paul was in prison in Rome where he would soon be executed. He writes to his disciple Timothy.

Only Luke is here with me. Please, get Mark, and bring him with you because he is helpful to me in my ministry (II Timothy 4:11).

These lines hold the reality of division and strife as well as the hope of healing and reconciliation.

In his book, Let Us Dream, Pope Francis provides an excellent set of reflections on the art of discernment when we arrive at the crossroads of life. He points out that life is filled with polarities that look like opposite forces in rivalry with each other. He calls these polarities “contrapositions.” He makes the point that contrapositions are not the same thing as “contradictions.” He suggests that reducing contrapositions to mere contradictions is the result of mediocre thinking and sets up false rivalries where there are none. What’s needed are people who can hold paradoxical tension until a creative breakthrough presents itself. Pope Francis refers to these breakthroughs as moments of “overflow.”

Surely, we could use some overflow in our world that is increasingly being divided into rival camps. Paul and Mark waited 10 years to find the overflow. I’m not sure we can wait that long.

So what’s the vaccine that protects us from an “isolated conscience?”

In my experience, it’s community, but not just any kind of community. Jesus called it the Kingdom of God. Paul called it the Church. Martin Luther King called it the Beloved Community. It’s a community that finds common purpose and without being “over and against” another group. Such a community can hold tension and transform it into creative action. But sometimes the tension becomes too much. When that happens what’s needed is the gift of Barnabas. His name means son of encouragement.

Barnabas believed in Mark and he refused to let Mark walk alone and become an isolated conscience. Who knows what they talked about as they walked together. I can imagine a million conversations including all the ways that Paul was a difficult person with whom to walk.

Whatever it was it softened resentments and created the conditions for overflow. Mark eventually reconciled with Paul. Mark also went on to found the first church in Africa (in Alexandria). He also went on to author the first Gospel, roughly 20 years after that first fateful journey with Paul. Now that’s overflow!

And here’s an interesting autobiographical detail that Mark inserts into his Gospel. It’s in the scene of the Garden of Gethsemane. Mark curiously mentions an unnamed man who abandons Jesus and runs away naked. This person is sometimes referred to as the “naked fugitive.” Some have speculated that this is Mark’s way of referencing his own story.

And there followed him a certain young man, having a linen cloth cast about his naked body; and the young men laid hold on him: And he left the linen cloth, and fled from them naked. (Mark 14: 51-52).

Oddly enough, Mark inserts another “young man” into the narrative on Easter morning. This time he is “dressed in a white robe.” Mark uses the same word for young man (νεανίσκος) which occurs only in these two places in Mark’s Gospel. Is this Mark’s way of talking about the overflow of the Gospel in his life – from naked fugitive to clothed witness?

At the very least, this passage is a reminder that we all abandon ship at some point. We all need to be clothed with the gift of grace that heals our isolated conscience and calls us back into community.

I pray for the gift of Barnabus at work among us. I pray for the capacity to celebrate the Spirit of God at work in the many contrapositions of our community. It’s what makes us dynamic. It’s also what makes us vulnerable. We serve a network of more than 100 cities that are home to wildly diverse expressions of humanity. We partner with 21 hubs who gather thousands of leaders from all walks of life. There are 29 women and men from different denominational, ideological and political backgrounds who are ordained to see and celebrate good news in hard places. Surely, at times, we walk in opposite directions, and the threat of an isolated conscience is ever before us, but in the care of the Spirit who reconciles all things, even this calls forth a larger way.