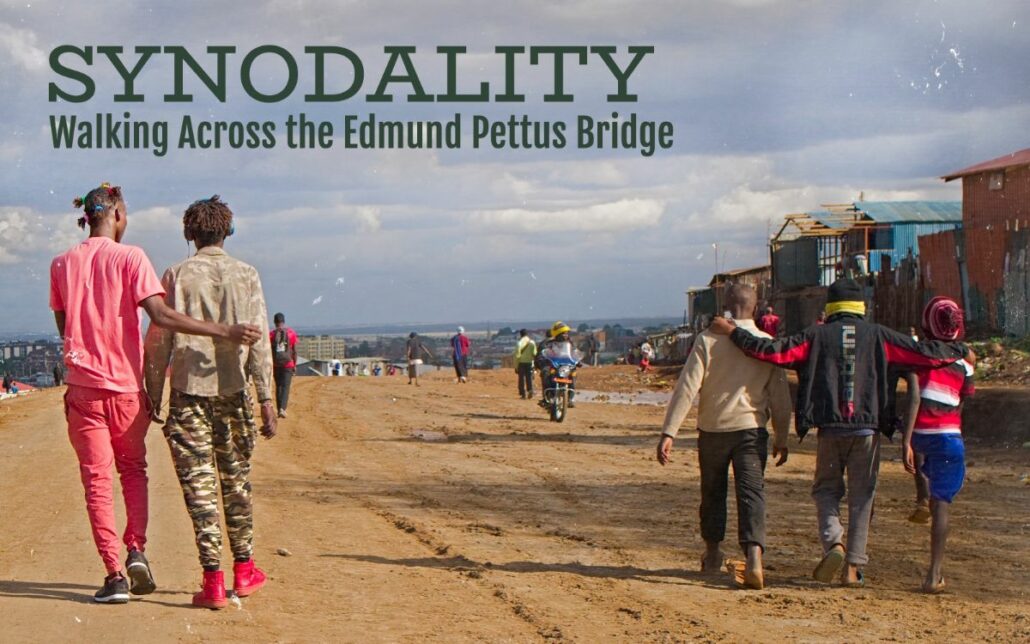 Our theme this year is synodality. Its root meaning is to “walk together.” We are learning how to become a synodal community who walks together across difference for the sake of the most vulnerable, discovering our shared humanity along the way.

Who knew that almost a year after we chose this theme several of us within the Street Psalms Community would walk together across the Edmund Pettus Bridge in Selma, Alabama? It was part of a vision trip hosted by our friends at the Empower Initiative, led by Ben McBride. It was the culminating experience of an intense three-day journey through the heart of the Civil Rights Movement here in the United States.

Prior to walking the bridge, we walked through the National Lynching Memorial, in Montgomery, Alabama. There we bore witness to the 4,075 documented lynchings between 1877 and 1950. We walked the streets of Montgomery where Rosa Parks became the symbol of the bus boycott that broke open the civil rights movement. We walked through Kelly-Ingram park in Birmingham, Alabama, where in 1963, under orders from Public Safety Commissioner Eugene “Bull” Connor, the police and firemen confronted student demonstrators, almost all of them children and high school students, first with mass arrests and then with police dogs and firehoses. The images of that day are seared into the souls of people around the world.

It was there at Kelly-Ingram park where I met an African American gentleman named Walker (yes, that’s his real name). He greeted me like he was the mayor of the park. He was born in Birmingham in 1963, just 13 days prior to the bombing of the 16th Street Baptist Church, which sits adjacent to the park. The bomb killed four African American girls. As I visited with Walker about the events that had taken place 60 years ago, he said to me with conviction, “There’s three kinds of anger: righteous anger, justice anger, and blind anger. Watch out for the third one, it’ll kill ya.”

I thought of his words as we walked across the Edmund Pettus Bridge – the site where Selma experienced its own “Bloody Sunday,” where, in blind anger, police started a violent confrontation with 400 unarmed African American protesters marching for voting rights.

Our walk across the bridge was more than just a symbolic act to honor those who put their lives on the line to secure voting rights for all Americans. It was also an invitation into the ongoing work of bridging difference so that everyone can belong.

As our world continues to polarize, the opportunity for bridging difference is abundant, but the courage and creativity necessary to do this is in short supply.

At one point in our three-day journey, we visited the house where  Martin Luther King Jr’s lived in Montgomery during the bus boycott. We remembered the night when his house was bombed as his wife and daughter slept inside. Miraculously, they survived. At the height of the bus boycott, MLK received as many as 40 death threats a day by phone. On January 27, 1956, three days before his house was bombed, he received yet another death threat. That night he sat alone at his kitchen table well past midnight. He was 27 years old. He wanted to quit. He confessed to God that he didn’t have the courage to continue. And then for the only time in his life, Martin heard the audible voice of God who said to his inner being, “Stand up for justice, Martin, stand up for truth; and I will be at your side forever.” Almost immediately his fear subsided. He continued on for 12 years, including the crossing of the Edmund Pettus Bridge, until his assassination in 1968.

How do we face our greatest fear and the hatred that denies our very humanity with something more than just blind anger if we haven’t heard the inner voice of God? I’m not sure it’s possible.

Just before we walked across the Edmund Pettus Bridge, Ben told the story of a 92 year resident of Selma. He was there on the Edmund-Pettis Bridge that day in 1965. He comes to the bridge daily to pray. It’s his daily practice.  I don’t know what this dear saint prays for, but I imagine that having witnessed the worst humans can do, this courageous witness of peace is trying to ward off the blind anger and fear that threatens to consume all of us, and turn us into the very thing we hate. I imagine that he prays to the same One that Martin Luther King Jr. heard from that night at his kitchen table – One in whom there is no violence and who is in rivalry with nothing, not even death. Who else can save us?

I suppose we all have an Edmund Pettus Bridge that we are called to cross. On the other side awaits all the fear and shame that seems legion by comparison to our naked little lives.

And here I want to confess the cowardice that is a constant companion in my life. I am not a tough guy! The slightest hangnail can signal the end of whatever I am doing, no matter how important it is. If called upon to offer the ultimate sacrifice, it’s very likely that I will turn and run for the hills or completely fall apart in the face of it. I live lightyears away from the kind of courage, creativity, and resolve that we bore witness to on our journey. And yet, I would be less than honest if I didn’t also admit that, within the context of the broader Street Psalms Community, I have seen and heard the voice of the One in whom there is no violence, who is in rivalry with nothing. And because of this, I can imagine the possibility of facing my greatest fears and my deepest shame and even entering my own death, and all this without fanfare, or a sense of self-importance. I’ve seen enough to know that the loss of physical life is so much less of a threat than being consumed by the fear and shame that destroys it. I don’t think that makes me a tough guy, I think it makes me like everyone else – one who holds the possibility of becoming human, fully human, which is the very thing that our 92-year-old saint is becoming.

I can’t share everything that went through my mind as I walked across the bridge, but here’s one more thing. And it may be the most jarring part of the whole experience. It wasn’t until after we crossed the bridge that I realized that the Edmund Pettus Bridge was named after a Confederate general and reputed Ku Klux Klan leader. There have been many attempts to rename the bridge, but this iconic site remains the Edmund Pettus Bridge. I find this troubling, and hard to accept. I would gladly vote to call it the John Lewis Bridge after the late senator who nearly lost his life on Bloody Sunday.

And then it occurred to me…

The resurrected Christ appears to us in a peculiar way. He comes to us bearing the very wounds of his own lynching and murder. He invites Thomas to touch these wounds. In Revelations, he is referred to as the “lamb who is slain.” It’s an impossible image – a living lamb, who is also a slain lamb. How can a living thing occupy its own death without being consumed by it? How is that possible unless that Living Thing is not in rivalry with death itself? I find this mystery strangely comforting. It is the reminder that the wounds of the resurrected Christ not only preserve the memory of human violence and its ever-present threat, but also the memory and promise of God’s mercy, which heals that violence and calls forth a whole new way of life – one that reconciles all things, even the chasm between life and death.

I am persuaded that one of the marks of an authentic Resurrection encounter is that we can trace the faint outlines of death from which it comes. Any revelation of Christ that comes to us without visible wounds is simply not Christ. The power of the Resurrection does not erase our wounds, it bears them with love, and through that love transforms them. As Richard Rohr says, “If we don’t transform our wounds we will transmit them.”

I could not be more grateful for Ben and his team for showing us how to walk together across difference, discovering our shared humanity along the way. They modeled for us what it means to create cities of peace for all people where everyone belongs. What a gift!

Connect With Empower Initiative and Schedule a Trip.
https://fosteringbelonging.org