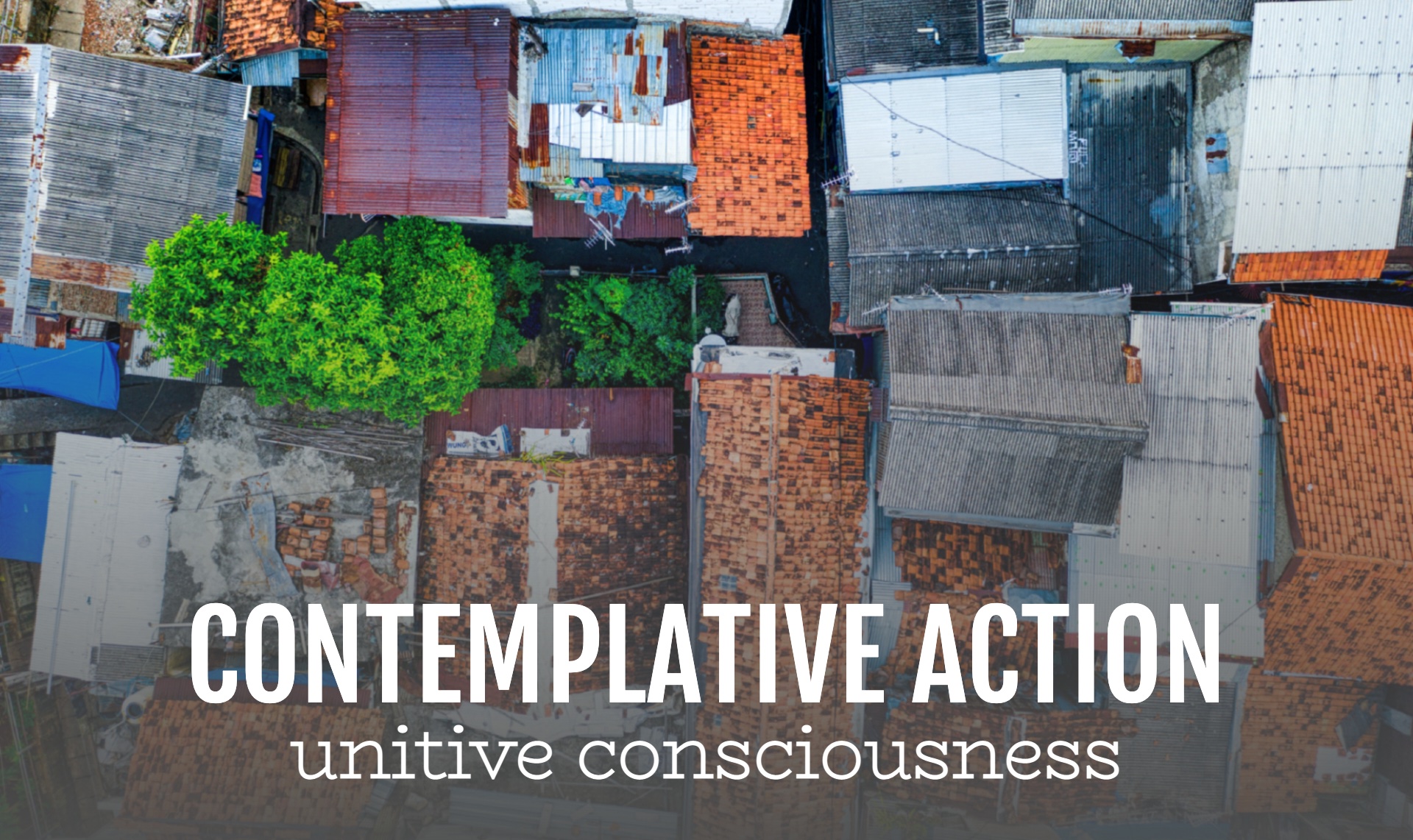 Reflections on becoming a community in mission that embodies a way of seeing, doing and being, that frees us to do things we never thought possible.

How can we become contemplative activists who help create cities of peace for all people?

a long, loving look at the real.

Pablo accepted the invitation to preach at an outreach center for alcoholics and drug addicts in San Salvador where he is from. When he got up to preach, he began weeping and was not able to say anything he had prepared. All he could do was ask the people that were gathered there to pray for him because in his brokenness he had nothing to give. The drunks and addicts encircled him, laid their hands on his bent over body, and began to pray. Pablo described how he nearly vomited from the rancid smell of body odor and alcohol, but was then suddenly overwhelmed by a sweet fragrance that took his breath away. “I smelled grace for the first time in my life,” he said, “and it was magnificent.”

In the garden of mystic lovers,

these are not true distinctions.”

Notes from the Underground

An Open Letter to the Community around this year’s theme of Contemplative Action.

The particular kind of evolution I have in mind has to do with how we form identity.

The following is written by Kris Rocke, Executive Director at Street Psalms.

Recently, the U.S. National Intelligence Council released its latest report. They produce this report every four years for the incoming presidential administration. It identifies the major trends and potential threats over a 20-year horizon. This year’s report is ominously titled, “A More Contested World.”

Particularly troubling is the alarming trend towards “social fragmentation.” According to the report, we are becoming increasingly fragmented with smaller and smaller echo chambers that reflect back to us our little realities. At the same time, we are more connected than ever through technology. The report references the 10 billion devices in 2018 that make up the internet of things and projects there to be 64 billion devices by 2025 and possibly many trillions by 2040. Connected, yes. United, no.

So, what’s the way forward?

It’s tempting to think the way forward is to double down on reforming systems such as church, government, business, and education. I recognize the potential for these systems to do good is immense, and I remain committed to their flourishing, however, it’s my sense that the way forward lies not primarily in the systems themselves, but in something else. The way forward lies in an evolution of consciousness. Regardless of how radically we reform these systems, I believe we’ve reached the end of what the dominant consciousness can do to create genuine community. To put it bluntly, we must evolve.

The particular kind of evolution I have in mind has to do with how we form identity.

Virtually all of us have been taught to form identity in one way - “over and against” the other. This has been the dominant consciousness for most of history. It is the water in which we swim. It’s not easy to see it for what it is until we become land-born creatures with lungs, not gills.

This kind of identity formation can be called dualistic consciousness. It is a way of seeing that insists that reality is divided into oppositional forces: light and dark, good and evil, black and white, us and them, winners and losers. Dualistic consciousness is inherently rivalistic, which is why it always ends in some form of scapegoating. When trapped in this way of forming identity, I only know who I am by defining myself over and against the other, displacing the other. Virtually all of my regrets in life can be traced to this way of being human.

Sadly, most mainstream religion is built on the foundation of dualistic consciousness. To be “in” Christ is to be over and against those who are “not.” Dualistic consciousness lends itself to power games in every sphere of life.  All of the dehumanizing “isms” we can think of are fueled by a dualistic consciousness, including white supremacy. It creates clear boundaries of who is “in” and who is “out.” And it can build strong bonds (on both the left and right), but in the context of difference, especially when difference is in close proximity, it leads to increasing levels of fragmentation.

Einstein said we can’t solve a problem with the same consciousness that produced it. I am convinced that we can’t solve the challenge of social fragmentation in the 21st century with a dualistic mind, no matter how “enlightened” it might be. Such a mind is great for building bridges, skyscrapers, and the worldwide internet that connects us. It can produce vaccines and solve important equations, but it is not capable of showing us how to relate across differences. The dualistic mind cannot create a world in which everyone belongs.

Given the increasingly interconnected nature of our world, I’m convinced we have reached the end of dualistic consciousness. Its end is violence. We must evolve.

Contemplative consciousness is an evolutionary leap forward led by the Spirit. It sees reality as whole. The contemplative way recognizes reality as an interdependent ecology where all things are related. It forms identity, not “over and against,” but “with and for.” It displaces no one and nothing. Some might call this unitive consciousness. Jesus modelled this for us. In the incarnation Jesus reveals a God who unites what the world divides - spirit and flesh, heaven and earth. Jesus reveals a God in whom there is no rivalry. God stands over and against nothing, not even death. Jesus shows us that the contemplative mind doesn’t need an enemy to justify its own existence. Where the dualistic mind feeds off of oppositional energy and division, the contemplative mind generates creative energy by holding tension and embracing paradox, until it yields a larger way.

Our friend Richard Rohr has been one of the major teachers of unitive consciousness within the Christian tradition. He sometimes calls it “the mind of Christ.” This way of seeing has spilled the banks of the church. It is increasingly found in a wide variety of traditions and movements. For example, it’s exciting to see leaders like Adrienne Marie Brown exercising unitive consciousness in the secular square as a black, queer feminist. She and others are integrating the contemplative way in the Black Lives Matter movement, using their own creative language and approach. I don’t pretend to fully understand it, but I recognize the gift and celebrate it.

People who think about this stuff estimate that a relatively small percentage of humans evolve beyond dualistic consciousness. But things are changing, and I believe they are changing rapidly. We are witnessing a huge evolutionary leap forward. It is an outpouring of the Spirit and it gives me hope.

Evolutionary change can be painfully slow and sometimes hard to detect, but I am encouraged by how I see this sort of thing happening in the here and now within the Street Psalms Community. Together, we are undergoing an evolution of consciousness – a way of seeing that is freeing us and those we serve. We are letting go of the temptation to reduce reality to a zero-sum game which perpetuates a constant power struggle that leaves only winners and losers. I believe we are being pruned of violence. We are learning what it means to undergo a gospel of peace and I couldn’t be more encouraged.

a Biblical reflection on this year’s theme of Contemplative Action.

"Truly I tell you, people will be forgiven for their sins and whatever blasphemies they utter; but whoever blasphemes against the Holy Spirit can never have forgiveness but is guilty of an eternal sin"—for they had said, "He has an unclean spirit."

The following is written by Rev. Sarah Wiles from her Word from Below Titled "the Unreasonable Work of Liberation":

Jesus caused a stir. Everywhere he went. As the crowds grew, the reasonable people grew concerned: “Everyone’s for healing and liberation and inclusion, but there’s a right way to go about it. Be reasonable.” Jesus is entirely unreasonable in his work of liberation.

He must be possessed, they say. Because God’s logic looks like insanity to those of us who’ve become accustomed to the world’s logic. All this disruption, this chaos, must be demonic, they say.

Isn’t it interesting that the reasonable people saw God’s goodness at work, and because it was so disorderly, decided it must be demonic?

Because this is what the Holy Spirit does. Whenever our rules or “order” threatens or denigrates the beauty of a child of God, the Spirit blows through and disrupts, disorders our order.

I get it. Really.

I am what some would call a progressive Christian. I have an order that I have come to expect. For example, when the Spirit shows up in conservative clothes, I am tempted to dismiss it or worse. I can only imagine how many doors I’ve closed to protect my sense of order. What terrifies me is having the views I’m so attached to disrupted—even if that disruption would bring life.

I want to share with you a door that I trust the Holy Spirit is opening. It may seem holy to you, or it may seem unholy. That very discomfort and disorder is the whole point of Jesus’ teaching this week.

My colleague Emily, a former member of the Tacoma Preaching Peace table, shared this story with us.

Kai is 6. She and her family were featured on HBO’s series TransYouth. Kai was born a boy, and from a very early age talked about being a girl. Kai’s mother did everything she could to dissuade Kai. Kimberly was a Christian, and her church led her to believe that her child was an abomination, and needed to be fixed through praying, fasting, and conversion therapy. Nothing worked. Kai continued to insist: she was who she was.

The suicide rate for trans youth is 40 percent. That number drops dramatically when trans children are supported by their community. When we call a child of God an abomination, in ways either overt or subtle, they hear. When we let our order obscure the presence of God, it has lasting consequences. Kimberly says that Kai used to pray and ask the Lord to let go home and live with Jesus—before she was six years old.

Kimberly’s heart broke, and she changed, as she says, “kicking and screaming.” She stopped trying to change Kai. The Spirit blew through, and she saw clearly. Kai was a beloved child of God, just as she was.

Most of us come to Jesus because we’re seeking peace. That’s not a bad impulse. Jesus leads to peace, but the way there often feels really disorderly. Letting the Holy Spirit blow through our lives can be tremendously disruptive, but it always, always, always brings life.

The Spirit of the Lord is upon us because she has anointed us to preach good news to the poor, to proclaim release to the captives and recovery of sight to the blind, to let the oppressed go free, and to proclaim the year of the Lord's favor.

We pray all of this in the name of the Father who is for us, the Son who is with us, and the Spirit who unites us all in the never-ending dance of Love. Amen.

Check out Richard Rohr Teaching on Non Duality  (Skip to 2:41)

Sign Up for our weekly Word from Below reflections

Something went wrong. Please check your entries and try again.
Scroll To Top